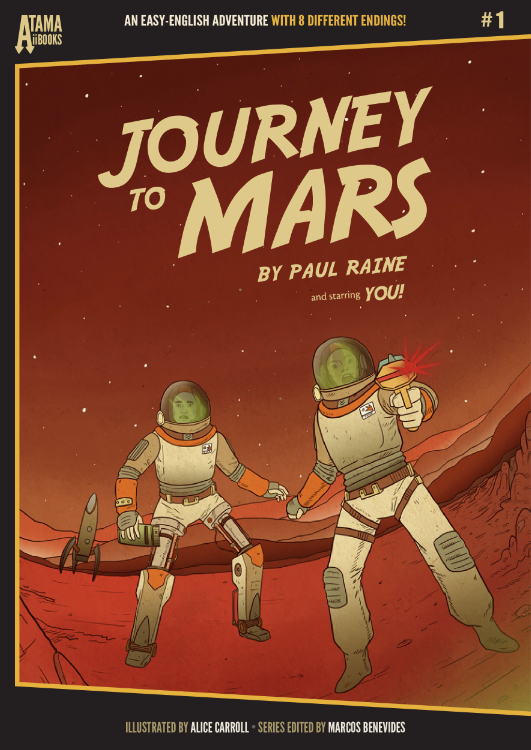 Been a busy couple of months here at Atama World Headquarters, and we’ve made progress on several exciting fronts. First of all, after lots of hard work and discussion with our designer, Mark Bain, we’ve finally settled on a definitive series cover. Here’s how it looks on our first title, Journey to Mars:

In the end, we felt these title fonts and illustrations are adventure-y enough that we didn’t need so much of the original bright yellow. Plus, the near-black adds a little bit of sophistication to the fun, almost like a graphic novel. I also love how the angles are suggestive of an opening door, or an open 4th wall, which is perfect for an interactive series.

We’ve also agreed on a series logo. In the end, we went with simple and bold. As much as I really like the earlier design, the boldness and instant readability of this one was hard to beat. Here’s how it might look, say, stenciled on the door of our New York penthouse offices.

Mark is confident he can get the website done by the end of the year as well, so hopefully that will be in my December update. No pressure, Mark! :-P

As for the writing and editing, that’s coming along nicely too. The first two titles are now all sparkly and ready to go, the third is in the shop for a final lexical check, and the next five are fully written and waiting their turn under my unforgiving red pencil. Beyond those, there are another dozen or so submissions in various stages of completion, so we should be able to keep you in adventure land well through the coming year. Exciting stuff!

Just for fun–and somewhat tentatively–here is the plan for the first 8 titles:

1. Journey to Mars by Paul Raine

2. Zombies in Tokyo by Andy Boon

3. The Lost Trophy by James Broadbridge

5. Hunter in the Darkness by Ramy Habeeb

8. A Darfur Story by Catriona Chalmers and Ann Mayeda

I really love how we’ve managed to put together such a great range of different stories. Also in the works are: a ghost story, a swords & sorcery type fantasy, a couple of SF themed titles, a western, a castaway story, an animal adventure, even a politics-themed story. Can’t wait to get all those out!

Oh, one minor little setback is the audio for the first three titles, which has been pushed back by a month or so due to one of our voice actors having come down with a rather nasty bug. (Get well soon, Tom!)

However, fear not! The first three titles are still launching in January 2014. Our fingers are furiously crossed, anyway.

PS: I ran across a cool RPG text-adventure video game project today that some of you may be interested in supporting. For 10 bucks you get the game when it launches next year: http://www.kickstarter.com/projects/1871839191/the-diviner (NOTE: If you read “RPG” above as “rocket-propelled grenade”, you are probably not the intended audience. Still love ya though, mom!)